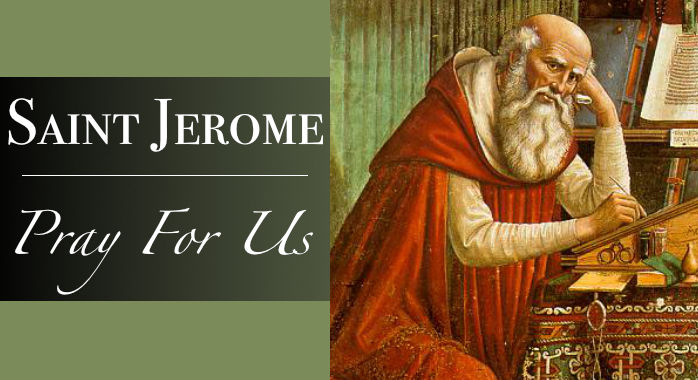 St. Jerome which means “holy name” was a priest, writer, and teacher born in Dalmatia, Croatia in 342 AD. He traveled to Rome to study languages and law and was ordained a priest. He became the secretary to Pope Damasus. Under his direction, St. Jerome was given the difficult task to translate the Old and New Testaments into modern Latin so that more people could understand the Bible.  Even though St. Jerome knew this was going to be a difficult project that would be easily criticized by others, he took the responsibility to work on it and did a thorough job. St Jerome quoted, “Good, better, best. Never let it rest. Til your good is better and your better is best.” This incredible mission took St. Jerome 30 years to complete and his work became the standard version of the Bible for more than 1000 years.

By translating and reading the Bible, St. Jerome grew deeper in his wisdom. He was an eloquent speaker who became famous for providing advice to others on how to have a closer relationship with God.  St. Jerome wrote beautiful letters about Jesus and books that explained to Christians the meaning of God’s word. St Jerome believed that “when we pray we speak to God; but when we read, God speaks to us.”

St. Jerome traveled to Bethlehem and joined a monastery where he helped the needy and the poor.  He even helped to open a school and taught the Greek and Latin languages to children.  During the later years of his life, St. Jerome decided to retreat to a cave so he could continue his studies, writings, and prayers.

St. Jerome is often depicted with a lion.  Here in this image, the artist tells the story of the day a lion entered the monastery where Jerome resided, causing his fellow monks to flee, but Jerome recognized that the beast was injured and he cured it by removing a thorn from its paw.

St. Jerome is one of the greatest biblical scholars of all time.  He is called the Father and Doctor of the Church and the “Man of the Bible.” One of his most famous sayings was,  “Now we have to translate the words of Scripture into deeds, instead of talking of Holy things, we must enact them.” This means that it is up to us, the community of St. Jerome CES, to take the words of the Bible and turn them into actions of goodwill, kindness, and love. 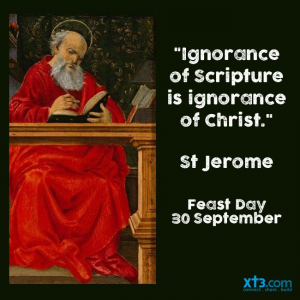 St. Jerome is known as the protector of scholars and the patron saint of librarians. He also had a great devotion to Guardian Angels and assured people that they had Guardian Angels watching over, protecting, and guiding them. He died in 420 A.D. His feast day is celebrated on September 30th.  We have so much to learn from our patron St. Jerome. 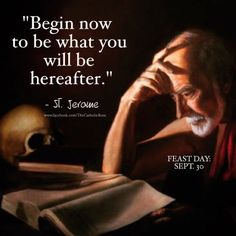 O Lord, you have given us your word for a light to shine upon our path;  grant us so to meditate on that word, and follow its teaching,
that we may find in it the light that shines more and more until the perfect day.